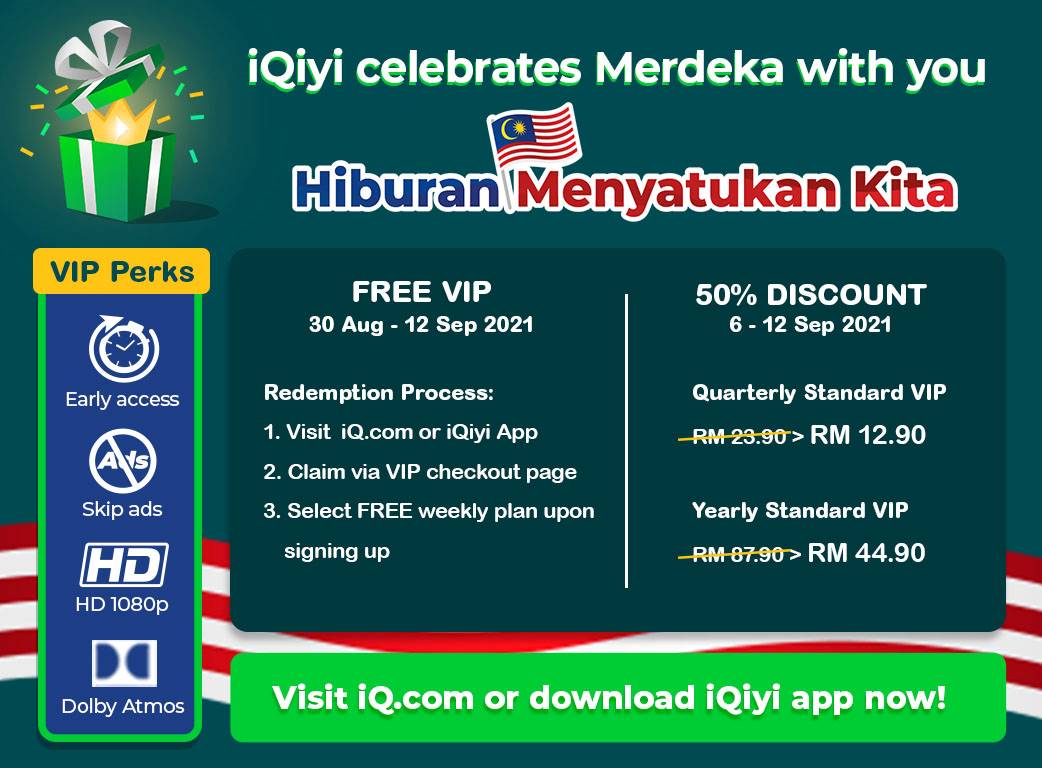 KUALA LUMPUR, 27 August 2021 – With Merdeka just around the corner, Asia’s leading streaming platform, iQiyi, joins in the celebrations by highlighting the best in Asian content and rewarding Malaysian viewers with a slew of exciting giveaways! Under its #HiburanMenyatukanKita campaign, iQiyi aims to showcase the power of entertainment in bringing people together, regardless of age, background, location or language.

As part of the campaign, the platform is offering Malaysians the chance to sample its VIP membership for free, and indulge in their favourite shows and films. Aside from being able to experience content in 1080P and with Dolby Atmos sound, VIP subscribers can also enjoy early access to upcoming shows and skip ads for an uninterrupted, high quality viewing experience.

During the campaign period between August 30 to September 12, Malaysians can sign up for a free one-week VIP membership. In addition to the free VIP giveaway, iQiyi is also offering a 50% discount for its quarterly and annual plans. The limited-time offer runs from September 6 to 12, with quarterly plans priced at only RM12.90, and yearly plans priced at RM44.90.

These special deals are iQiyi’s way of recognising the support it has received from Malaysians, earning it the status of being the most downloaded streaming service in the country this year (as of August 2021). In July, the service was also ranked as the number one Asian streaming service in terms of monthly active users, daily active users and overall time spent, according to public data by AppAnnie.

As part of the #HiburanMenyatukanKita campaign, iQiyi is curating a selection of titles on its platform that are most loved by Malaysian viewers for a special Merdeka slate. The titles in this curated slate are based on iQiyi’s viewership data, and demonstrates how premium high-quality content is able to act as a unifying thread for Malaysians of different ages, backgrounds and locations.  Across the platform’s diverse Malaysian users, viewership is equally strong for entertainment of various languages – particularly Chinese, Malay, Korean and Japanese content. iQiyi is also a daily indulgence among Malaysians, with local viewers spending almost 1.5 hours a day on the platform.

With its specially curated Merdeka slate, iQiyi looks to give its diverse Malaysian users more of their favourite entertainment content, be it romantic dramas such as Love Is Sweet and 7 Hari Mencintaiku, Korean hits like My Roommate Is A Gumiho, or classic anime series like Naruto. This slate also includes iQiyi’s first Southeast Asian Original The Ferryman: Legends of Nanyang, a series featuring Malaysian-born actor Lawrence Wong alongside an ensemble cast of Singaporean and Malaysian stars like Qi Yuwu, Jeanette Aw, Tay Ping Hui, Debbie Goh, Jojo Goh and Koe Yeet.

The #HiburanMenyatukanKita campaign also saw a social media contest, which called on Malaysians to “localise” the titles of 15 popular iQiyi shows by renaming them in local slang – and Malaysians everywhere demonstrated their creativity in spades! In addition to receiving a selection of exclusive rewards, winners of the contest will soon see their “Malaysianised” versions of the titles emblazoned on the platform’s homepage in place of the original names.

To learn more about iQiyi’s Merdeka slate, or redeem your free week of VIP access, log into the app or iQ.com